FIT2FITE are officially launching their Online portfolio of classes representing the Fundamentals of FITNESS:

Our suite of classes, FIT2FITE Fighting Moves To Funky Grooves, FIT2FLOORCORE, FIT2HIIT and FIT2FLEXIBILITY progress your fitness in line with the 4 SSSS's ensuring a scientific and constructive training programme that provides tangible results.

World class Master Trainers from across the globe reflecting the Fundamentals of Fitness will take you on a journey utilising the FIT2FITE training template. 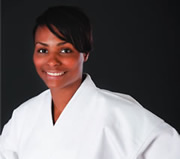 Natalie has been practising Karate for 30 years and has been a member of the England Karate Team for 18 years. She has won domestic and international titles and is one of the top female Karate athlete in the world. Natalie is currently training for Olympic qualification competitions with the ambition to represent Great Britain in 2021 in Japan.

‘Being fit is a mindset.’ 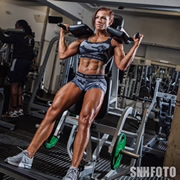 Claire has over 20 years experience in the health and fitness industry. With a background in karate and kickboxing Claire transitioned to Bodybuilding becoming the World Natural Bodybuilding Champion. She is an exceptional athlete and trainer with a genuine passion for both people and fitness.

Dianne Reilly is considered one of the most consistent Karate athletes Britain has ever produced. She was a mainstay of the National Team for over 15 years winning numerous.domestic and international medals. After retiring from International competition in the early 2000's she continued to teach Fitness classes with emphasis on Yoga, Pilates and Kick Aerobics, Dianne is a wife and mother with a full time job yet she still maintains a healthy and active lifestyle.

Interesting fact: Dianne and Greg Francis the FIT2FITE founder were Karate training partners for over a decade. She also competed on the National Team with Greg's sister Janice Francis nee Irwin and was taught Karate by the Francis brothers Joe and Phil. 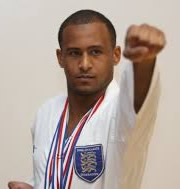 Ross Mathieu is an international fitness presenter, international karate athlete and a current member of the National England Karate Squad. He has combined his love for fitness, martial arts and music to become a Fit2Fite Instructor in 2010. He regularly teaches classes in East London and presents at fitness days, weekenders and holidays, specialising in combat fitness. 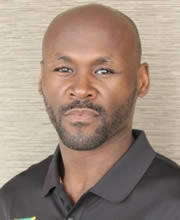 Alton Brown is a Fitness Instructor & Olympic pathway athlete representing the Jamaica Olympic Association at the highest levels within the sport of Karate. With 27 years of experience within Karate, Alton is the #1 world ranked athlete within his division across the Caribbean, #2 across Pan America and among the top 20 ranked athletes in the world. Having also represented England, Alton is a former European Champion, World Championship & Commonwealth Games medalist.

Alton is a huge believer in the power of fitness and martial arts to empower communities. This can be seen in his work as a charity ambassador supporting communities, particularly youth, nationally and internationally to become better versions of themselves through the use of Karate and Fitness.
Achievements

Interesting fact : Alton is the first ever Karate athlete from Jamaica to medal at a major Continental Karate championship and sees it as his mission to blaze a trail for the next generation. 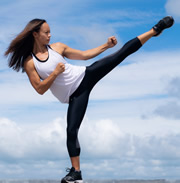 Sian has been practising Karate since 1997 and has been a member of the New Zealand Karate Team since 2006. She has achieved podium placement at both national and international events including winning The Oceania Championships. With a passion for health, fitness and helping others, she has a broad experience in teaching having worked with elite athletes and beginners, refugees and people of all ages with complex needs. Sian has been a fitness instructor since 2009 and is currently training for Olympic qualification with the ambition to represent New Zealand in Tokyo in 2021.

Interesting fact : During her studies at the University of Exeter she was successfully selected onto the Officer Commissioning Course at the Royal Military Academy Sandhurst where she trained for ten months. 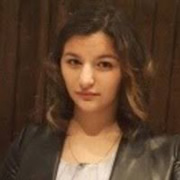 Aneesha has been practising Karate for over 20 years and was a WIKF (Wado-ryu International Karate Federation) England squad member and has won domestic and international titles. She has recently moved to Asia, where she will continue her fitness journey and will be teaching fit2fite in that region.